The Canadian Homebrew Forum is an online community for home brewing, beer making, and wine making at home in Canada. Members are Canadian home brewers like yourself who learn, gain and share knowledge about brewing beer, wine, and mead at home.
https://www.canadianhomebrewers.com/

by twistandstout
I harvested all my hops today. I planted my hallertau and chinook rhizomes last year. This year, I purchased and planted 2-3 year old cashmere plant. I was blown away by how much hops I got. I harvested a shit load of hops, took me 4 hours.

One thing, I had to throw away half my chinook due to an infestation of what looked like aphids - tiny green bugs and larvae. Half the cones were gross and brown and spoiled looking so I didn't take any chances and tossed them. Still got a good yield of chinook, though. Could anyone help me with this bug problem for next year?

Also, there was some brown/white-ish residue on a few of the cones. Is this mildew?

I'm at a real loss as to what to do with all these hops. I bagged them in 5oz quantities in freezer bags. I want to make a wet-hopped bavarian hefe and a black ipa with my hallertau and chinook, so I sucked the air out of a few bags with a straw and put them in the freezer so I can throw them in the boil once the time comes to brew in the next few weeks, but I have tons more hops I simply do not have the space to freeze wet. I'm currently reading about drying hops on a window screen laid flat which I'll most likely do.

Any advice would be greatly appreciated. Also, I'm adding pictures to this thread: 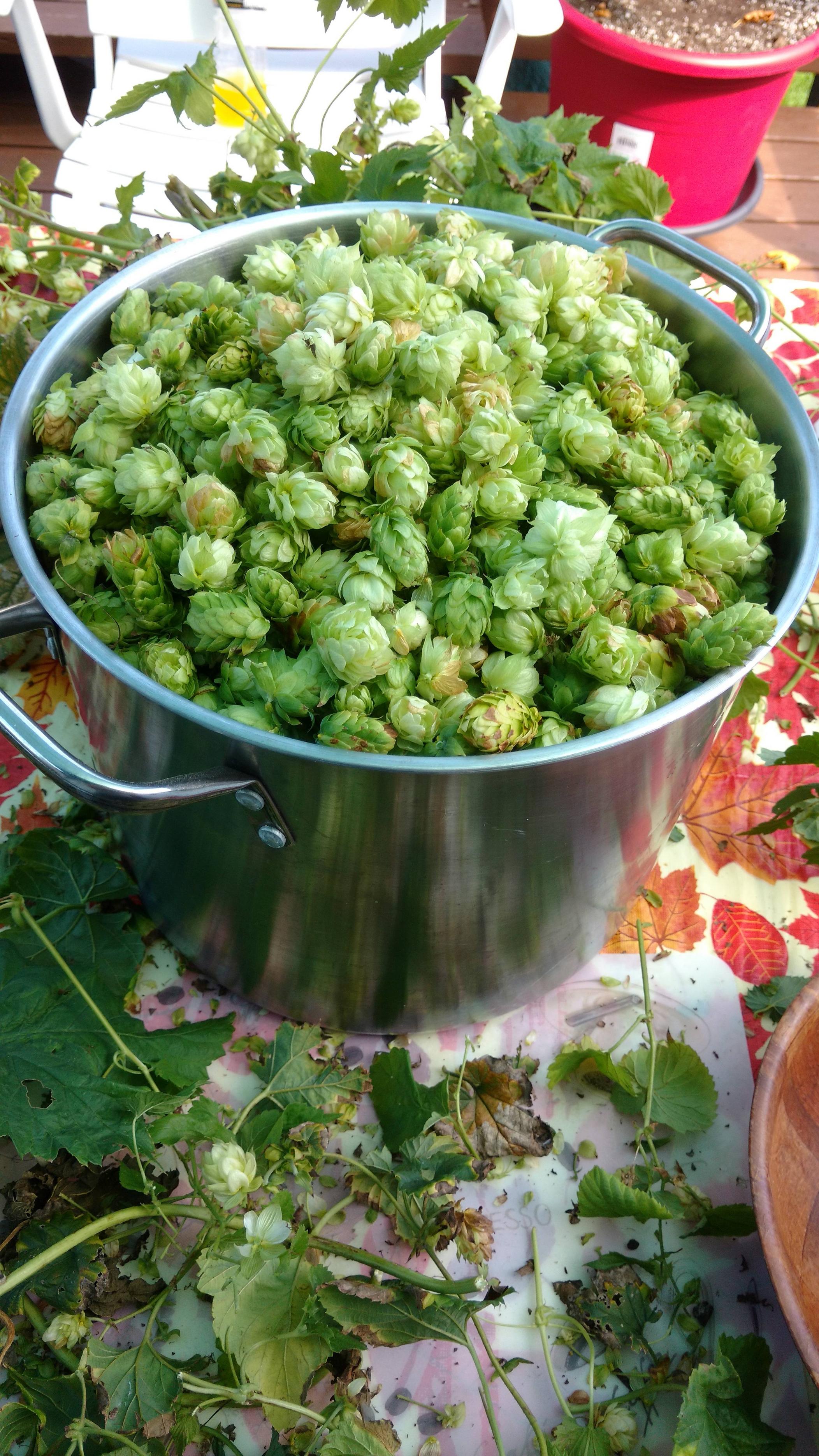 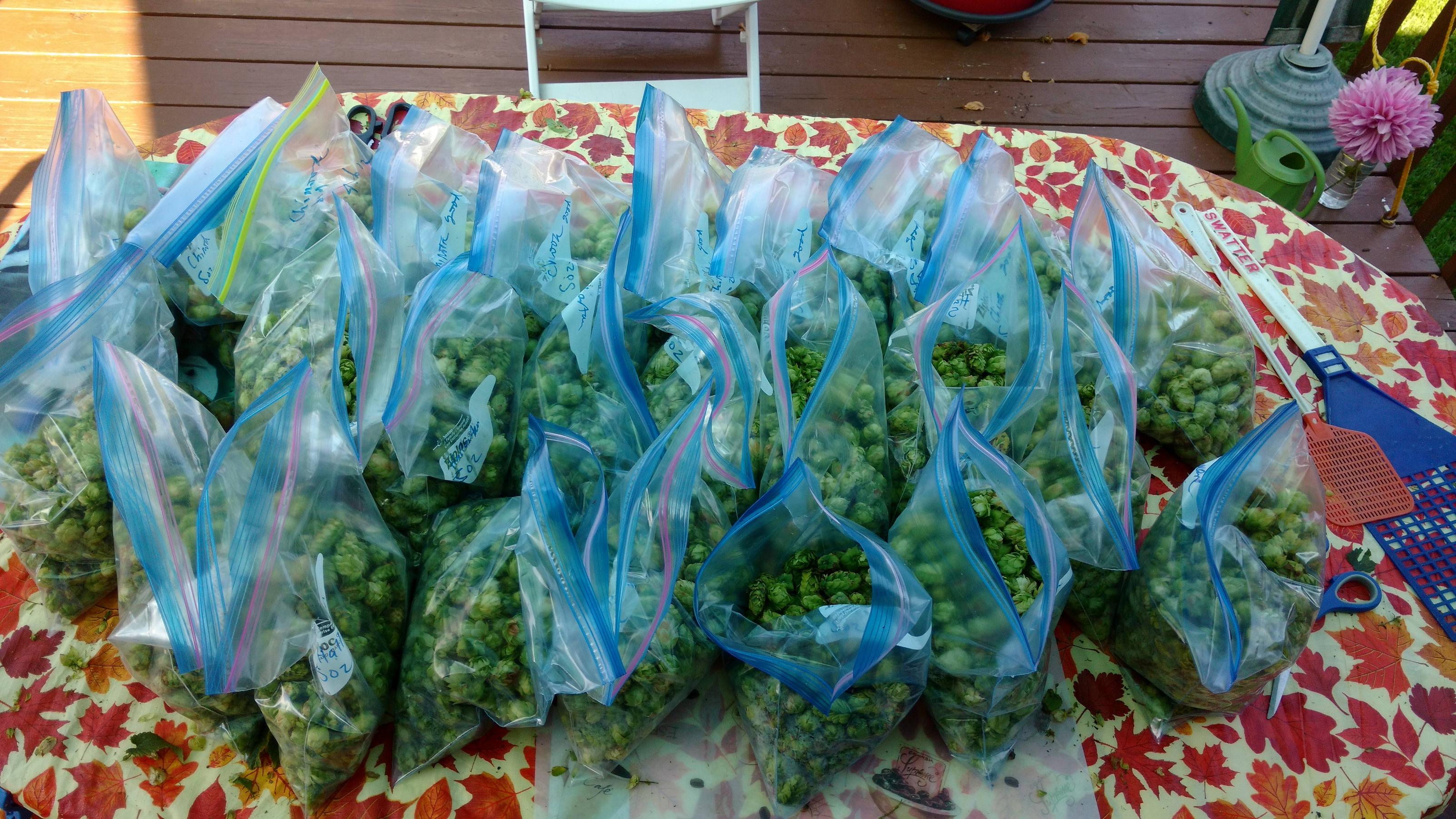 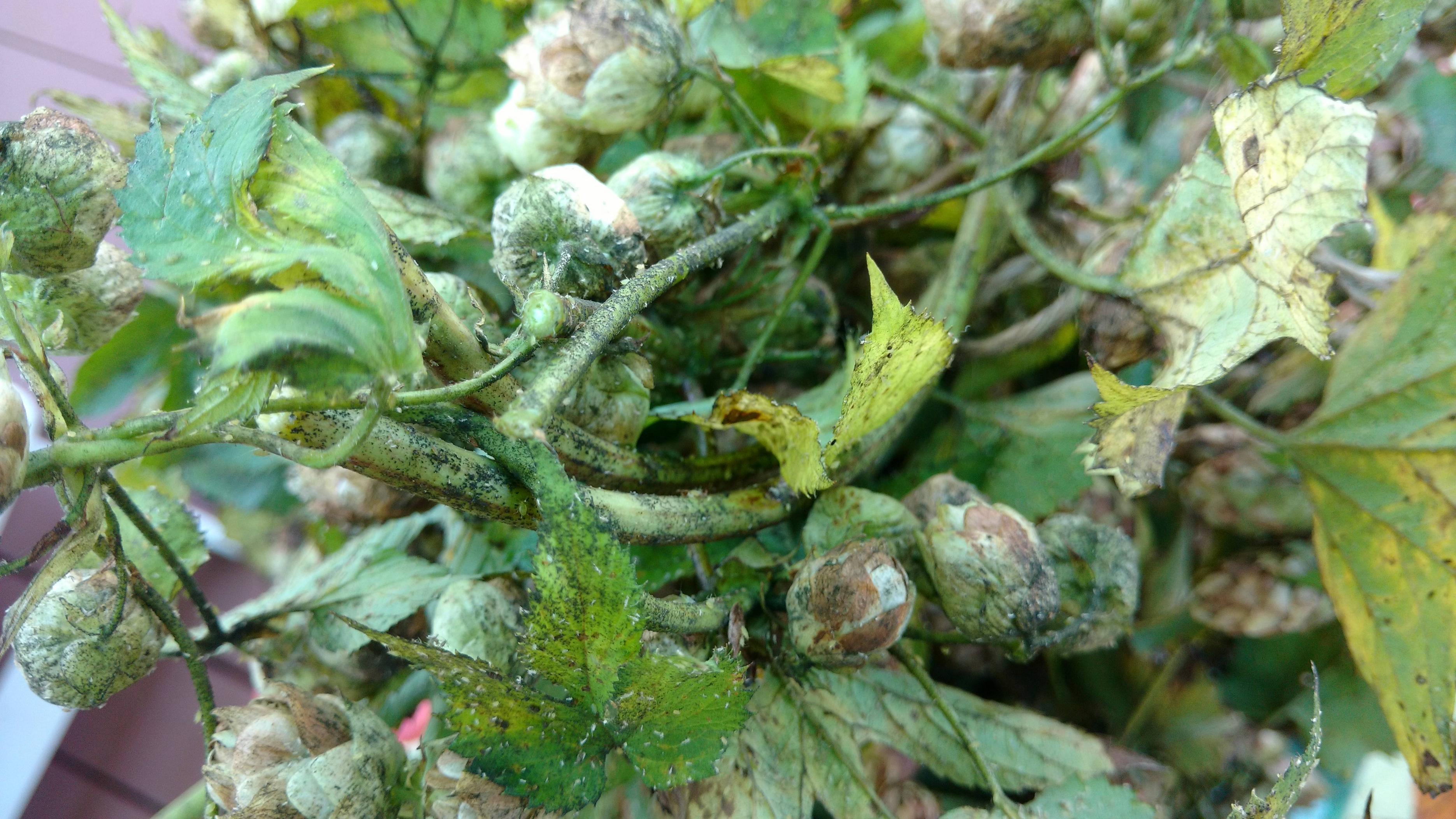 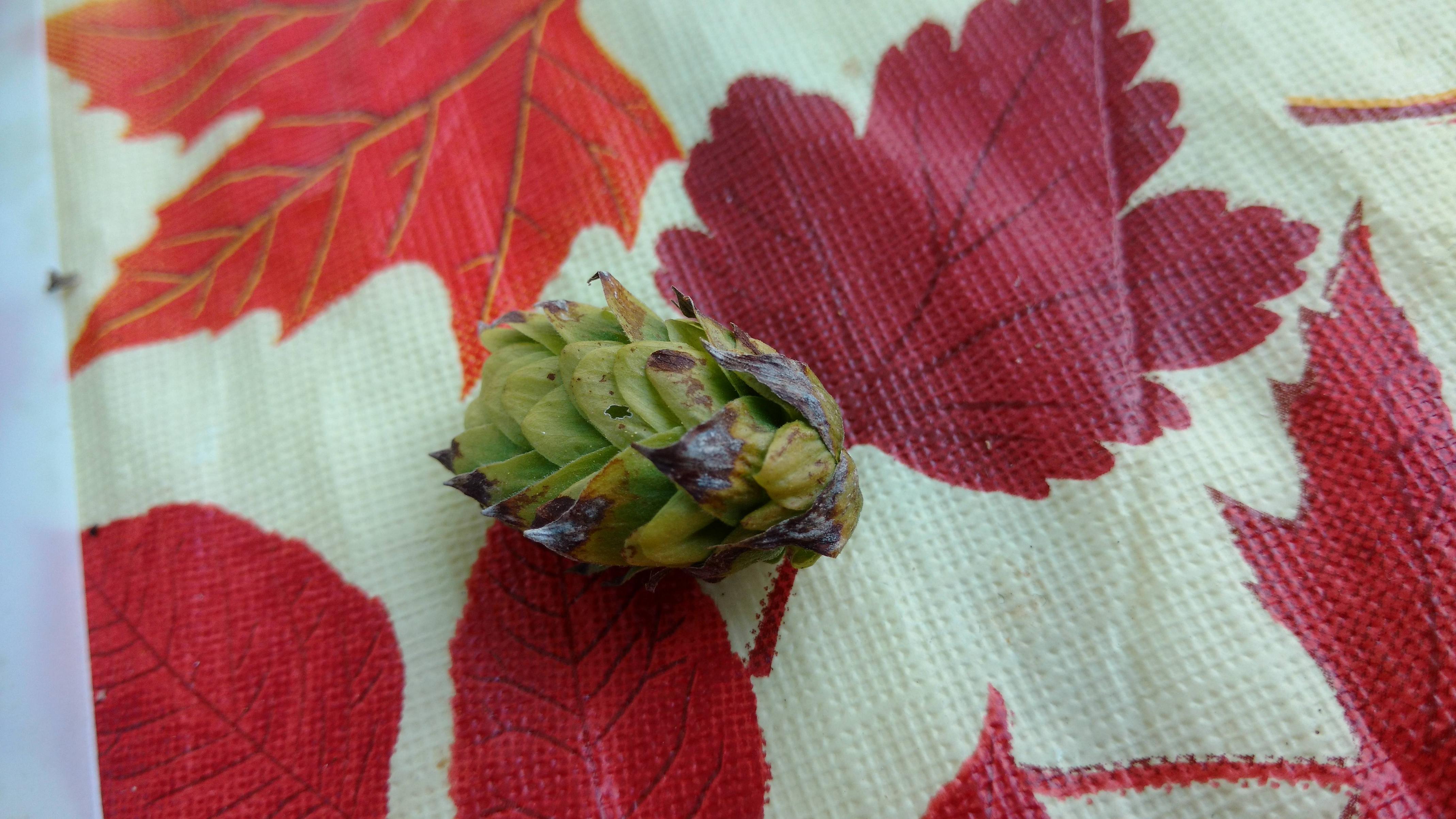 by ECH
You got to dry them. They won't last too long undried in the freezer

If you have a convection oven, I put mine in at 150F on convection (lowest mine will go), I just leave some off to the side separate that I can take out and weigh. You want to take about 90% of moisture out of the hops before freezing to preserve them.

Short of a convection oven, a large framed screen to put he hops on, with a fan blowing air up through the screen and the hops, besides that...food dehydrator if you don't have room for the screen and fan combo

by twistandstout
Great suggestions, and the latter is what I actually did. I took all the screens out of my windows, laid the hops over them, layered the screens with some space in between, purchased a box fan and dried them for 4 days. I just packaged them in ziploc bags with the air sucked out and now they're in the freezer. I did, however, keep a few bags of 'wet' hops in the freezer as I'm planning on making a wet hopped bavarian hefe with my hallertau.

It was a lot of work!

by ECH
Not so sure freezing the wet hops are going to give you the desired effects you are looking for. The moisture in them will make the cell walls explode when it freezes (as water expands when frozen) and break down the plant cells.

Could be wrong on that, but commercial breweries can't freeze wet hops to be used later, have to be used within days of being picked.

by twistandstout
Yes, I know this to be true as well. The only problem was that I needed to harvest that weekend, and I couldn't brew the same day. I did the same thing last year - kept some 'wet' hops in the freezer and tossed them in the boil. The beer was really nice. I'd never let them thaw out, though. I'd imagine that would be quite disgusting.

I did get the chance to dry hop my current IPA with my 6oz of wet cashmere I harvested. The cashmere hops smelled hardcore of weed, so I was afraid it could ruin my IPA, but I removed the hops the other day and was greeted with an explosion of peach/passion fruit which got me really excited.

by Brewmaster22
WOW they look great!!
I was at a hop farm a couple of weeks ago they had the same problem they said it was a bad year
would you like to sell some???

by twistandstout
I've kept some 'wet' hops frozen in the freezer as an experiment. I dried the rest and ended up with a lot of hallertau. As for selling, I don't have much overall, but I'd have to check what I'll be brewing in the coming months. I'm not sure how long dried leaf hops keep in the freezer but I'm assuming not very long. Is hallertau a variety that interests you?
All times are UTC-04:00
Page 1 of 1